The 450-hectare Rye Harbour nature reserve, with its coastal habitats of grassland, saltmarsh, and sand and shingle shoreline, celebrates its 50th anniversary this year with a new visitor centre opening in association with Sussex Wildlife Trust. It aims to help visitors better experience the area’s flora and fauna of more than 4,200 plants and animals, including 200 rare and endangered species. There’ll also be a new cafe and exhibition and education spaces, with a programme of activities, training and conservation projects.
• ryeharbourdiscoverycentre.org.uk

The redevelopment of Newcastle’s city pool into a health and wellbeing centre has included careful restoration of original features such as 19th-century arches and alcoves, 1920s pool hall tiles (revealed beneath layers of paint), wood-panelled changing rooms and terrazzo flooring. Alongside the 25-metre pool and Turkish baths, the Grade-II listed site will also include a new spa, cafe-bistro and fitness studios. Built in 1927 and opened in 1928, the site closed because of council cuts in 2013, but sport and leisure charity Fusion Lifestyle began to redevelop it in 2017 after campaigners secured the space’s status as an asset of community value.
• city-baths.co.uk

After a 2018 summer pop-up on Brighton seafront saw thousands of visitors taking part in guided sea swims, open water events and beachside yoga, a permanent National Open Water Swimming Centre is set to open on the same spot. Overwhelmingly positive feedback from the local community helped the Sea Lanes gain planning permission to transform the Madeira Drive site into a permanent outdoor heated pool with 39 units for small businesses. SwimTrek has already signed up to have its new headquarters here, alongside food kiosks, shops and fitness spaces.
• sealanesbrighton.co.uk

The former museum and library buildings between Plymouth’s university and its art college are being transformed into a new cultural hub. The Grade-II listed site will be refurbished with a contemporary extension housing an archive on the marine heritage of the city and the south-west, a museum of local stories, exhibition space for contemporary art and touring shows and a study centre, plus a cafe and a new piazza. Mayflower 400: Legend and Legacy will be the first exhibition, recounting the vessel’s 1620 voyage from Plymouth to America.
• plymhearts.org

Aiming to inspire creativity and play amid nature, a second Bewilderwood adventure park is opening, this time in the grounds of Cholmondeley Castle in south Cheshire. The first park, in Norfolk, was founded by children’s author Tom Blofeld in 2007. At the woodland site, ziplines, rope bridges and slides, tree houses, mazes, aerial and ground walks and interactive storytelling stages will entertain under-16s and their families. The early-19th-century Cholmondeley estate also includes floral, water and ornamental gardens, a farm shop and tearoom.
• bewilderwood.co.uk

A new immersive attraction, the Dark Walk, opens in May at 18th-century Bodmin Jail, alongside renovation across the whole museum. The interactive route will take visitors on a journey through life in the 18th and 19th centuries, exploring the history of the region, the jail and its former inmates, and dark tales of highway robbers, smugglers and the Beast of Bodmin Moor. Later in the year, a hotel will open in the Grade-II listed building, with its 70 bedrooms in former cells. A bat sanctuary is also in development, to protect the nine species that have made their home locally.
• bodminjail.org

A 250-acre site between Sheffield and Rotherham will soon be home to the fourth family-friendly Gulliver’s theme park, loosely based on the 1726 novel by Jonathan Swift. Its largest resort to date, and will be aimed at aged 2-13-year-olds, with more than 50 rides and attractions across multiple themed areas, including Western World, Toyland, Smuggler’s Wharf, Lost Jurassic World (pictured) and, for the youngest visitors, Lilliput Land. Onsite short-break accommodation (from £199 a night for a family of four) includes self-catering lodges, treehouses and family rooms with bunk beds, all a few minutes’s drive from the nature reserves and watersports centre at Rother Valley Country Park.
• gulliversvalleyresort.co.uk

READ  Spain on a budget: expert tips on holidaying like the Spanish

From the Swanage Snapper (a 140 million-year-old crocodile skull from the cretaceous period) to Thomas Hardy’s handwritten notebooks – many more of the 4 million objects in the Dorset County Museum collection will be going on display in its new extended galleries this summer. The redeveloped site, co-owned by the Dorset Natural History and Archaeological Society, will also include a learning centre, research spaces, a shop, tearoom and improved archive.
• Dorsetcountymuseum.org

Country park and reservoir Llys-y-Frân, south of the Preseli hills in Wales, is undergoing extensive redevelopment to transform it into the “great Welsh water park”. There will be a new outdoor activity centre and waterside cabin, a bike pump skills area, 14km of cycle tracks, a refurbished visitor centre and cafe, and camping and caravan pitches. Llys-y-Frân is a significant site for fishing – hosting national and international competitions – as well as windsurfing, rowing, canoeing, sailing and the Welsh Dragon Boat Championships.
• Llys-y-fran.co.uk

The Museum of the Home, London – summer

A two-year project, called Unlocking the Geffrye, will be completed in 2020, when the east London museum will reopen with 80% more space for exhibitions, events and collections. The brand new Home Galleries will explore everyday experiences of making, keeping and being at home over the past 400 years. Other developments include a new cafe, library and “domestic gamechangers” exhibition, alongside renovation of the popular period rooms and gardens.
• museumofthehome.org.uk

Built in 1874, the crescent-shaped Roundhouse was originally used as a canalside stables and stores. It was bought by the Canal and River Trust in 2001, which partnered with the National Trust in 2017 to renovate the Grade-II listed site. The aim is to create a new centre for exploring the area’s canal network, alongside independent shops, cafes, exhibition spaces, a cycle hire and repair workshop, boat tours and a shared working space for conservation organisations.
• nationaltrust.org.uk

More than 700 volunteers from the local community plus a herd of Berkshire pigs have helped dig over the birch glade at the new Royal Horticultural Society Garden in Salford, Greater Manchester. The Bridgewater Garden, in the grounds of the former Worsley New Hall, will be the RHS’s first new garden in 17 years – and the largest gardening project in Europe. The site will feature a kitchen garden, a learning garden, a heritage orchard, and wild woodland play structures for children. Community allotments will grow food for local food banks, and a therapeutic garden will be used in a new “social prescribing” project for people with disabilities, chronic illness and dementia.
• rhs.org.uk/gardens/bridgewater

The English sparkling wine industry has gone from strength to strength in recent years, particularly in the south-east. Hambledon Vineyard, on the edge of the South Downs national park, is one of the UK’s oldest commercial vineyards, set on 80 hectares of chalky slopes producing chardonnay, pinot noir and pinot meunier – the three grape varieties most commonly used in champagne. Plans for development include a new tasting room and visitor centre overlooking the vineyards, new tours and increased wine storage capacity in a new underground cellar. Hambledon is the only gravity-fed winery in the UK, allowing wines to be created with minimal intervention and more energy efficient production.
• hambledonvineyard.co.uk

Aiming to inspire a new generation of makers and innovators, a former silk mill at Unesco world heritage site Derwent Valley Mills is the new home of 50,000 objects from the area’s 300-year-long industrial history. Lombe’s Mill is thought to be one of the first fully mechanised factories in the world, and will be the home of the new Museum of Making. The Rolls-Royce Eagle Engine, which helped power the first transatlantic flight in 1919, will be among the exhibits, alongside significant items from railway and (more recent) gaming history, and more. The first in a series of collaborative initiatives and events, the Re:Make the Museum project invited hundreds of local community members as citizen curators and makers to form the basis of the inaugural exhibition.
• derbymuseums.org

Archaeological excavation in historic Colchester has so far uncovered two of the five Roman theatres in the UK. And when renovation work on the modern-day Mercury Theatre began, brightly coloured Roman plaster, a medieval hearth and an English Civil War-era musket ball were among the discoveries made under the former wardrobe department, offices and restaurant. This area will soon be home to a new production block, with two rehearsal rooms. Development of the site, which opened in 1972, will also see a bigger, brighter foyer, more seating, improved accessibility, a new cafe, revamped backstage facilities and spaces for outreach work and new talent.
• mercurytheatre.co.uk

London’s largest permanent photography gallery will open in the White Chapel Building in east London later this year, with over 8,000 square metres of exhibition spaces, restaurants, bars and a photography academy, and a programme of exhibitions, talks, screenings and more. It’s the third international site (after Tallinn and New York) for the Stockholm-based Fotografiska Organisation, which opened in 2010 and has hosted exhibitions by artists including Annie Leibovitz, Sally Mann, David LaChapelle and Helmut Newton.
• fotografiska.com/london

The 100-acre Slimbridge wetland wildlife reserve has 12 new attractions open in 2020. Already complete are a Scott-era research hut, the Scott House Museum (named after WWT founder and conservation leader Peter Scott), a Waterscapes Aviary and an estuary tower hide offering views of the Severn estuary with, often, thousands of wild birds. At Easter, the open-air Living Wetland Theatre will open, offering film screenings and interactive live shows as birds fly overhead. A new Severn estuary walkway is due to be completed in time for the summer, a place to spot amphibians, dragonflies and butterflies.
• wwt.org

With plans to light up 14 bridges along the Thames, Illuminated River will be one of the longest public art projects in the world, aiming to encourage enjoyment of the river and riverside at night, while highlighting the bridges’ historical and architectural importance. Changing sequences of LEDs have been conceived for each bridge by artist Leo Villareal. Work on London Bridge and the Cannon Street, Southwark and Millennium bridges was completed in summer 2019. Next, to be finished by autumn 2020, will be Blackfriars, Waterloo, Lambeth and Westminster bridges and the Golden Jubilee Footbridge (formerly Hungerford Bridge). Still to come are Tower Bridge plus Vauxhall, Grosvenor Railway, Chelsea and Albert bridge.
• Illuminatedriver.london

• This article was amended on 16 January 2020 to correct the date that the City Pool and Turkish Baths in Newcastle upon Tyne opened. An earlier version said the current baths opened in 1859; that was the year the previous pool on the same site, designed by John Dobson, was built.

Sun Feb 9 , 2020
If you're planning to visit Budapest, chances are you're going to need some accommodation. So whether you're looking for a cheap 4-star hotel, an all-day luxury hotel or a good mid-range hotel, here's our selection of the best hotels in Budapest. 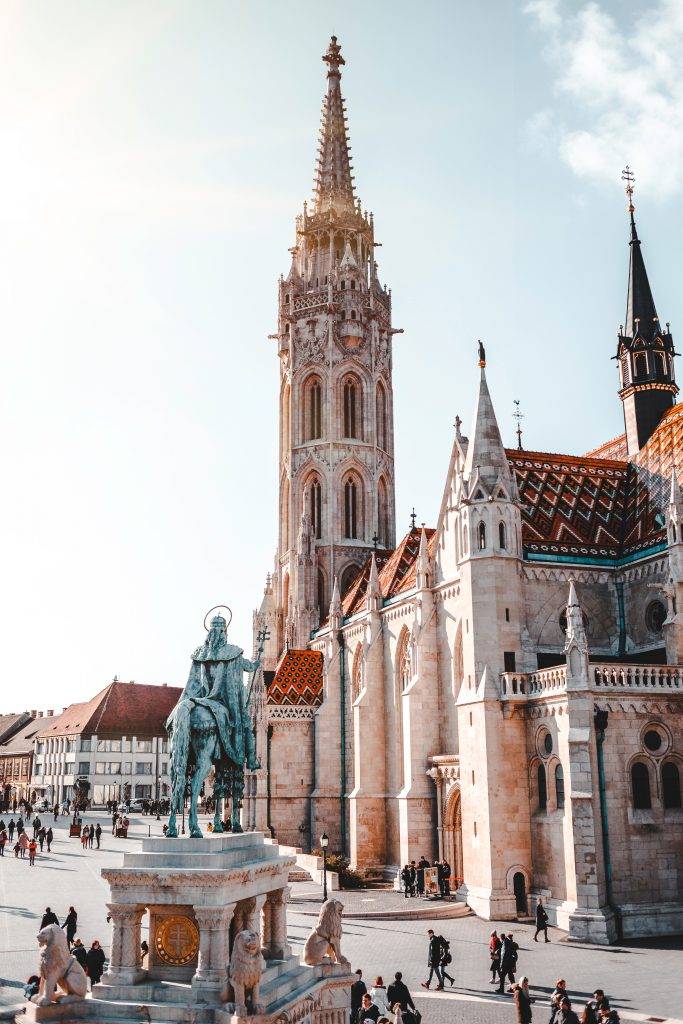