The Dordogne comes close to offering everything that travellers head to France for: beautiful chateaux, traditional French gastronomy, a bucolic landscape of vineyards, forests and rivers. Picturesque fortified villages, such as Beynac, La Roque Gageac and Eymet (site of an unexpected pre-Brexit boom for UK settlers), and charming towns such as Bergerac, Brantôme, Bourdeilles and Ribérac, have long been popular with Brits wanting to settle in France, and this is one part of the country where they have always been warmly welcomed into local communities.

CASTLES AND CAVES FROM SARLAT TO LASCAUX

What to see and do

Sarlat-la-Canéda is the perfect base for exploring the grandiose hilltop châteaux that look down on the Dordogne river and the Unesco-listed prehistoric sites along the Vézère valley. Its narrow streets are lined with lavish sandstone mansions, perfectly preserved since the middle ages and Renaissance. Don’t miss taking a ride up the 14th-century bell tower, where renowned architect and Sarlat local Jean Nouvel has designed a panoramic glass lift offering 360-degree views.

Each of the Dordogne’s landmark castles has something different to discover. The immense Château de Castelnaud (€10.80) is perfect for kids, with its remarkable collection of medieval armaments, while the equally majestic Château de Beynac (€8), above a stone village that tumbles down to the river, was a location for Luc Besson’s 1999 Joan of Arc movie. The ornate, chocolate-box Château des Milandes used to belong to dancer and activist Josephine Baker, and houses an incredible museum about her life. In a tranquil valley is the breathtaking Château de Commarque (€8.50), a towering mass of ruins above ancient cave dwellings.

Garden-lovers should leave time for two of France’s most famous formal gardens. The Jardins Suspendus at Marqueyssac (€9.80) are a magical maze of 150,000 swirling, looping box hedges, while those at the Manoir d’Eyrignac (€12.50) are more English in style, including an extravagant perfumed rose garden.

The Dordogne’s incredible prehistoric sites are principally along the Vézère river. Kick off at Les Eyzies, spectacularly hewn into the cliffside, with a tour of the Prehistoric Museum (€6/€4.50 ). On the other side of the river from Les Eyzies, a rickety staircase disappears into the Grotte du Grand Roc (€8.20), a vast cavern filled with stalactites and stalagmites, while La Roque Saint-Christophe (€8.75) is a kitsch but fascinating reconstitution of a kilometre-long cave village cut high into a cliff, inhabited 55,000 years ago by Neanderthals.

Nothing quite prepares for a visit to Lascaux (€16), especially since the recent opening of a new £50m centre complete with futuristic multimedia special effects and interactive iPad guides. This is the second recreation of these caves and their 600 prehistoric wall paintings. The original site, discovered in 1940, closed to the public in 1963 to protect the fragile Cro Magnon artwork known as the “Sistine chapel of prehistory”. The new Lascaux is attracting huge crowds, with tour groups leaving every six minutes, so consider visiting the quieter, original Lascaux II complex (€12), which is frankly just as impressive a recreation of the original caves.

Where to eat and drink

Sarlat is the undisputed foodie capital of the Dordogne, with tempting, affordable restaurants serving regional specialities such as succulent duck magret and confit, and omelettes bursting with girolle mushrooms. It’s difficult to beat the honest home cooking at Le Bistrot, which does a two-course €14 set lunch or €14-€18 main dishes in the evening, when diners sit out opposite buskers, clowns and acrobats performing outside the towering gothic cathedral.

Sarlat is surrounded by great-value traditional fermes auberges (farm inns). At La Table du Chaffour, Nicole and Jean-Marie Verlhiac grow vegetables, raise ducks and geese, and use only their own produce for the hearty three-course €15 menu tradition or the six-dish €29 menu gastronomique.

In the hills above Château Montfort is the no-frills Pech de Malet hotel, whose sunny terrace has awe-inspiring vistas over the Dordogne valley, perfect for a sunset aperitif, with house wine at €6.50 a bottle, accompanied by a €6.80 plate of irresistible pommes sarladaises, thinly sliced potatoes sautéed with garlic, parsley and cep mushrooms.

Restaurants around the caves of Les Eyzies tend to be aimed mostly at tourists, but just outside the village, talented chef Pascal Lombard has opened the casual Bistrot Les Glycines. Working from an open kitchen, Pascal’s young team prepare a €17 three-course lunch menu with creative dishes such as salmon rillettes topped with edible flowers and root vegetables, and grilled duck hearts.

A tour of Lascaux takes around half a day, and rather than looking for food in the nearby villager of Montigny, visitors can choose between the brasserie, snacking and cafe options at the centre’s excellent Cafe Lascaux, with prices ranging from a €9 salad to the €15.90 set lunch.

You can’t get more central in Sarlat than the main square above the town’s most popular cafe, Le Glacier (€90 B&B). The four bedrooms are enormous, with double glazing so you are not kept awake by the late-night crowds drinking below. The idyllic landscapes around the castles and caves of the Dordogne and Vézère rivers offer dozens of chambre d’hôtes (B&Bs), catering to all budgets.

To splash out for a night in a romantic setting, two addresses stand out: the monumental 13th-century Château de Puymartin (doubles from €150 B&B) has two stately rooms with antique furniture, while the more ornate Château de Monrecour (doubles from €120 room-only) has recently become a 10-room hotel, with hot-air balloons taking off from the gardens from time to time.

READ  Holiday guide to Basilicata, Italy: what to see plus the best restaurants and hotels

On the road to Lascaux are two very different B&Bs: the chic Maison de Marquay (doubles from €90 B&B) in the middle of a tiny village, where owner Gérard Lerchundi prepares a gourmet €33 dinner each night; and the rustic Pech Mortier (€55 B&B), in the countryside by Marcillac-Saint-Quentin.

A few miles from Lascaux is Condat-sur-Vézère, where sumptuous 13th-century L’Hostellerie de la Commanderie (doubles €110), is in beautiful wooded gardens with swimming pool and a breakfast room decorated with glittering candelabras.
• More B&Bs at sarlat-tourisme.com

What to see and do

Bergerac comes to life on Wednesday and Saturday mornings, when its narrow medieval streets are taken over by a market. Stock up for a picnic in the surrounding vineyards with organic tomatoes, saucisson packed with hazelnuts and fragrant strawberries. Bergerac is at the heart of affordable and welcoming wine country. It’s easy to follow a Route des Vins around the rolling vine-clad hills, discovering little-known reds such as Pécharmant and the luscious Monbazillac dessert wine.

Enoy your picnic in the gardens of the Renaissance Château de Monbazillac but skip its touristy tasting sessions and head instead to the equally imposing Château de Bélingard to try its fruity €5.90 Bergerac Blanc. You may well bump into the estate’s garrulous owner, Laurent, Comte de Bosredon, who will tell you how wine has been made here since the days of the Celts.

Halfway between Bergerac and Périgueux, take a side trip to Domaine de Neuvic, a fish farm with a difference as it harvests sturgeon eggs to produce caviar. For €19, visitors get a tour of the farm and see some seriously enormous sturgeons, plus a spoonful of caviar and a glass of bubbly.

Périgueux is the capital of the Dordogne and is dominated by the swirling domes and turrets of its white Saint Front cathedral. Inspired by St Mark’s Basilica in Venice, the present building looks similar to the Sacre-Coeur in Paris – not surprising because it was restyled in the 19th century by the same architect.

The same distinctive white stone is even more conspicuous in another of the Dordogne’s jewels, medieval Brantôme, almost entirely encircled by a meander of the Dronne river. Brantôme’s massive Benedictine abbey was founded in AD769 by the emperor Charlemagne, and behind it are some much older troglodyte caves, with haunting religious wall carvings.

Hire a kayak (€10) or paddleboard (€12) (brantomecanoe.com) for a couple of hours to do a lazy tour of the city or take the whole day and paddle seven kilometres upriver to Bourdeilles, where a fortified chateau (€8.70) houses an enormous collection of antique furniture and tapestries.

READ  Penang guide: what to do, plus the best bars, restaurants and hotels

Where to eat and drink

The centre of Bergerac has plenty of relaxed wine bars and pubs such as Au Plus Que Parfait. The best place for a romantic lunch is under the giant plane tree spreading over Place du Feu, where Une Cuillère pour Maman serves a selection of light, contemporary €10 plats du jour, which might be sea bream with sun-dried tomatoes or date-encrusted roast lamb, plus vegan and vegetarian options.

In Monbazillac, the welcoming Maison Vari is owned by a local vigneron (wine maker). Château Vari wines can be tasted for free at the bar, or there are tables in the garden of this friendly cafe-wine bar for indulging in generous €10 plates of charcuterie and local cheeses with a chilled bottle of organic €12 Bergerac blanc or rosé.

In Périgueux, head straight for the town’s historic covered market on Place du Coderc. It was already a foodie paradise but now it boasts the Bistrot de la Halle, a minuscule diner where a glass of wine is the perfect accompaniment to freshly shucked oysters or a hamburger au foie gras.

Brantôme caters for all budgets, from the Michelin-starred Moulin de l’Abbaye, to the cheap-and-cheerful Co’Thé-Café , where a homemade soup, quiche and salad costs €7.50. Alternatively, sit out on the river bank at Comme à la Maison (13 quai Bertin, +33 9 8051 6833, no website), where owner Sarah Nicolas serves a €16 three-course lunch with seasonal, organic products.

There are numerous winemaker B&Bs dotted across the Bergerac area, with an especially warm welcome at Domaine du Boyer (doubles from €66 B&B). Yannick Dumonteil and his Vietnamese wife, Ghislaine, make guests feel they’re part of the family and run cellar tours with tastings of their wines – and there’s a family swimming pool surrounded by vines.

Rather than looking for a place to stay in busy Périgueux, carry on to Brantôme, where Sandrine Laby has a cosy four-room B&B, Au Nid des Thés (€90 B&B), right above her salon de thé, with a sunny roof terrace for breakfast, where she serves home-baked cakes and a choice of 30 teas.

Take the lovely 10km drive south-west along the Dronne to medieval Bourdeilles, crossing an ancient stone bridge to enter the village. Here, the venerable Hostellerie les Griffons (doubles from €95, breakfast €13) sits right on the river. Old-fashioned but charming, this 16th-century auberge has 10 rustic-beamed rooms, as well as a small pool.

For a more outdoorsy experience, carry on to the north of the Dordogne, where Parenthèses Imaginaires (cabins sleeping 2, from €110 a night, minimum two nights) is a sprawling campsite with a lake and thick forest. Dynamic young owner Francoise has created an eco-glamping resort, with romantic lakeside wooden chalets and areas for tents and vehicles (pitches from €20 for two nights).

Ryanair flies to Bergerac from Liverpool, Stansted and East Midlands; Flybe flies from Birmingham, Southampton, Exeter and Edinburgh. Bordeaux is 90 minutes from Bergerac by car. Travelling by train (from London to Bordeaux, changing in Paris) costs from around £170 return on Eurostar. Bergerac is 530 miles from Calais and 360 miles from Caen.

Easter until late autumn is peak season, with many gardens in full bloom. The average high temperature in Bergerac ranges from 20C to 28C between May and October, falling to 10C in January.

Holiday guide to Basilicata, Italy: what to see plus the best restaurants and hotels

Wed Dec 18 , 2019
Tweet    ” Imagine a region that has miles of white sand beaches on one coast, picturesque rocky bays on the other, two mountainous national parks, and one of the world’s oldest cities. Add lots of warm sunshine plus fine food and wine and you might expect the area to be a […] 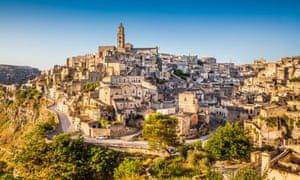