It takes two hours to reach the Lost City. My guide, Toby Clarke from Walking Ibiza, leads me down a road that dwindles into barely perceptible paths rising and falling through the forest. Toby’s dog, Cosmo, runs off on long diversions, a flickering presence in the sea mist that drifts through the trees around us. Finally, we reach the remains of a long stone wall. It protects a thumb-shaped peninsula that rides out on white-chalked cliffs into the flat, tideless Mediterranean. Behind the wall are the flattened ruins of the Lost City. Many believe this was the last stand of the Moors, who ran the island as an Islamic caliphate for three centuries.

It is hard to hike to the Lost City in the summer heat but this is Ibiza in winter. An island becalmed, cooled and open to inspection. On a sunny February morning, I stand on the clifftop and enjoy a view unchanged for millennia. The remote, undeveloped hills bear only juniper trees. Gulls circle the empty expanse of Cala d’Albarca, Ibiza’s largest natural bay. The silence is so total that it is threatened only by the soft roll of the sea 200 metres below.

Cosmo is part podenco, the handsome dog that is emblematic of this island. The podenco was brought to Ibiza on the galleys of the Moors; images of the breed are carved on the walls of Egyptian pyramids. As Cosmo darts across the ruins of the Lost City, he is running over ghosts.

Ibiza works in the summer and rests in the winter. In the rural north, I drive along empty roads between fields filled with almond blossom and wildflowers, and the pretty villages offer a commonality of whitewashed church, village square and a bar showing signs of life.

In nearby Sant Miquel de Balansat, the stone floor of Can Xicu bar has been varnished by centuries of feet. The place has been in the d’en Planes family for 130 years. A photo on the wall shows Toni d’en Planes performing with an Ibicencan dance troupe in New York in 1965.

At the Can Vidal bar in Sant Joan de Labritja, a few kilometres east, Vicente Vidal rattles through the five generations of Vidal who have owned the bar and insistently pours me a glass of hierbas, the island’s herb liqueur. At Bar Anita in San Carlos (or Sant Carles de Peralta), towards the south coast, another Vicente pours me another, to accompany tapas of boquerones (marinated anchovies) and sliced pork in oil and lemon.

READ  Spain on holiday: a day at the beach in San José, Almería

I’ve spent a lot of time in Bar Anita: I wrote a novel set in the village (San Carlos, Vintage, 2014). Bar Anita was the base of the hippie invasion of Ibiza that began in the late 1960s, initially driven by US draft dodgers. The eponymous Anita served them tortillas and hierbas, and became a post office on the side. As we talk, Vicente points out Anita herself, walking across the square. The guardian of the hippies is a 94-year-old model of Ibicencan reserve in traditional black.

I have lunch at Atzaró, an elegant agroturismo on a working orange farm – and in the Guasch family for eight generations. Its menú del día is sourced entirely within 1km of the hotel. Then I drive west to San Antonio and the warm embrace of nostalgia.

In 1963, my grandad Jimmy Walker, a doctor in Dundee, successfully treated the relative of a Norwegian. In gratitude, the Norwegian offered the use of a villa on a Spanish island called Ibiza. After a two-day journey, my mother’s family reached San Antonio bay. On one side was a fishing village. On the other was the villa and empty fields.

One evening, they saw a handwritten sign for Doc’s Bar, and followed it to a thatched bar overseen by an asthmatic man from Harrogate called Cliff Buckle. Buckle, advised by his doctor to seek warmer climes, had wound up in Ibiza and was building holiday homes for adventurous Brits. My grandparents operated under Presbyterian conditions, but Ibiza does funny things to people and they paid £3,000 on trust for the home that remains in the family today.

I stand on the roof built by Buckle. The fields that my mother and her siblings hiked over to the beaches have been filled with hotels, but the evening view remains unchanged as the sun sets behind the island of Conillera.

The next morning, at my hotel Can Partit, the co-owner, Nieves, is concerned. I tell her of my plan to cycle across the island and she worriedly plies me with delicious, thin omelettes made from eggs laid this morning. Can Partit is a charming, rustic finca surrounded by almond groves in Santa Agnés de Corona, and in the family of Nieves’ husband José for 200 years. José points to a vast juniper beam in the roof. His grandfather, the strongest man on Ibiza, lifted it by himself.

We see the pool used in Wham’s Club Tropicana video, the bar where Freddie Mercury had his days-long 41st birthday party

I cycle with Simon Rose of Velo Club Ibiza, who last year covered 13,000km guiding cyclists round the island. We follow country roads that are largely unsigned, rarely seeing a car as we pass fields of sheep and winter crops, and climb over hills of endless pine.

With my legs numb, my saddle apparently replaced by a spear, and Simon looking absolutely fine, we disembark in Santa Gertrudis. The walls of Bar Costa, as with many of the island’s older bars, are decorated with the works of local artists, taken as payment for bar bills. Two bellota hams hang above the bar.

I start the next day on a mountaintop platform, exhibiting what are surely some of the most inelegant yoga stretches this idyllic setting has seen. The spectacular finca, Can Luminosa, offers year-round yoga (ibizaretreats.com) and is an example of the island’s reinvention (drop-ins welcome in winter; in summer it’s residential). After the lager-laden 1980s and the clubbing 1990s, the 21st century is about wellness.

As an antidote, I visit Pikes Hotel in San Antonio for a reminder of the island’s hedonistic spirit. Dawn Hindle and husband Andy McKay were one half of Manumission, the weekly club night that ran for 15 summers from 1994, offering barely contained mayhem for my generation. Now they’ve bought Pikes, where founder Tony Pike was ringmaster for 30 years of celebrity debauchery.

Dawn walks me round the hotel, which is being lovingly updated during its winter break. We see the swimming pool used in Wham’s Club Tropicana video, the bar where Freddie Mercury held his days-long 41st birthday party, and the suite where Pike and Grace Jones began a torrid affair. Pikes has a bar around every corner. “We don’t do yoga,” smiles Dawn.

READ  Mallorca: the other side of Love Island

That evening I visit Ibiza Town, where newer buildings spread outward from the old Dalt Vila (high town), on a hill behind vast 16th-century ramparts. Within those walls, I walk through cool lanes canyoned between grand houses. Coats of arms above doorways show helmets turned to the left, a sign that the houses had been gifted to illegitimate offspring, sent to Ibiza by embarrassed mainland aristocracy. I walk uphill, passing the Santa Domingo convent, where housebound nuns sell pastries through grated windows, and the decorated mouth of the tunnel through which Catalan soldiers rushed in 1235 to begin the bloody expulsion of the Moors.

At the top of the hill, a platform offers a panoramic view over the Mediterranean. In the summer this terrace would teem with people. This evening I am alone, on the island my family have been coming to for over 50 years.

To the east, the local llaüt fishing boats set out looking for squid. To the west, the sun sets over the Ses Salines salt flats. The view feels ancient and unchanged. This is Ibiza in winter. When the island shows its age, and is all the better for it.

The trip was supported by the Ibiza Tourist Board. Doubles at Can Partit cost from €98 B&B in low season. For more on holidays in the Balearic islands, see illesbalears.travel.

Flights
British Airways is the only airline that flies direct to Ibiza from the UK in winter, with returns from London City from £220. In summer easyJet, Ryanair, and Thomas Cook Airlines (as well as BA) fly from airports across the UK.

Best time to go
November to April are the quietest, cheapest months, for an authentic taste of Ibiza with temperatures averaging around 15C (though they can go higher). The summer party season runs from May to October, with July and August the busiest, hottest and most expensive months.

Hooked on Galicia: spectacular seafood … but not without a fight

Tue Dec 17 , 2019
Tweet     It’s one thing to cook an octopus. It’s quite another to catch one, to actually haul an octopus out of the sea and try to convince yourself, as its tentacles wind around your arm, that you’ll be eating it for dinner, not the other way round. The Basque chef […] 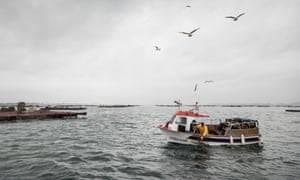