There are few cities with such an extraordinary setting as lofty La Paz. At 3,640 metres above sea level, Bolivia’s de facto capital has serious altitude. Fly in and you’ll see the pancake-flat Altiplano (high plain) fall into a steep-sided bowl lined with a maze of adobe and red-brick buildings, which mix with modern skyscrapers at the base. And towering above it all is the jagged, glacier-topped Cordillera Real.

That it lacks a long checklist of sights is part of its charm. It’s worth spending time in La Paz, not only acclimatising to the altitude but simply wandering. An amalgam of architectural styles, cultures and beliefs, it has everything from offerings to the goddess Pachamama to incense-filled colonial churches, food stalls to trendy cafes, bowler-hatted cholitas to hipsters among its theatrical street life. It’s frenetic, chaotic, often frustrating but never dull.

More than ever, it’s championing its culture, from local artists to age-old crafts. There’s a gastronomic revolution under way, with restaurants that use only Bolivian produce and bars that mix homegrown spirits. And Mi Teleférico, the world’s longest and highest urban cable car network, is making it easier to get around the city.

In petticoats and pigtails, wrestling cholitas bounce off the ropes in a blur of somersaults, high kicks – and hair-pulling. Join the locals as these feisty females fight it out in El Alto, complete with ear-splitting music and a melodramatic compère. The cholitas, indigenous Aymara women, have created their own niche in this once male-dominated sport, to portray women as powerful and proud of their heritage.
• Sunday afternoons at the Multifuncional de la Ceja de El Alto, tickets around £6, no website

El Alto’s colossal open-air market is said to be Latin America’s largest. Watch locals barter for everything from hand-knitted hats to SUVs, herbal medicine to llama jerky. Getting there is part of the fun. Ride Mi Teleférico’s red line up to the high plateau for spectacular views over the city skyscrapers, Cordillera Real and the ramshackle terracotta-coloured buildings that cover the upper slopes.
• Sunday, around 16 de Julio station

The best-preserved colonial street in La Paz is lined with restored 18th-century buildings now home to boutiques, galleries – including the dazzling Andean cosmic vision of Aymara artist Mamani Mamani – and five small museums that can be visited on a single ticket. Head to the Museo de Instrumentos Musicales for ancient nose flutes and the Museo de Metales Preciosos for pre-Colombian gold. Museo del Litoral Boliviano holds historical maps, the Museo Casa Murillo presents colonial life and the Museo Costumbrista Juan de Vargas – where you can buy the ticket – displays the city’s traditions.

READ  Portland city guide: what to see plus the best hotels, bars and restaurants

Burrow beyond the tourist tat of the centuries-old Witches’ Market and you’ll find all manner of mysterious powders, potions and amulets linked to Andean beliefs and shamanic practices. Earth-honouring Bolivians bury preserved llama foetuses in the foundations of new homes and businesses as an offering to Pachamama. Stevia is a natural sweetener from tropical Yungas that’s been used for more than 400 years, and hercampuri, thought to cleanse the body, was popular in the pre-Inca period.
• Up from San Francisco Church, between Calle Jimenez and Linares

In an 18th-century palace, Musef is a colourful and contemporary overview of Bolivia’s diverse cultures. Highlights include the collections of festival masks, Andean ceramics and intricate weavings, including chullos, the iconic knitted hats with earflaps. The non-profit institution is dedicated to promoting Bolivia’s ethnic diversity and research into ethnology, and has a shop selling crafts and books.
• Calle Ingavi 916, +591 2 240 8640, musef.org.bo

This meat-loving city’s first plant-based fine-dining restaurant has been a resounding success. Led by young Bolivian chef Sebastián Quiroga, Ali Pacha – a play on “universe of plants” in Aymara – is in downtown, in the basement of an old colonial building, with original exposed brick walls, tiled floors and mix-and-match chairs. The seasonal, surprise three-course lunch, and five- and seven-course dinner menus burst with local flavour: perhaps a ceviche of Andean tubers or a leafy green take on tamales. Upstairs, Quiroga’s new bar promotes the best Bolivian spirits, craft beer and wine. The five-course dinner is around £17.
• Calle Colón 1306, +591 2 220 2366, alipacha.com

Boris Alarcón is a man on a mission: to make the historic centre great again. At his latest cafe-bar the decor’s bespoke, with shelving made from deconstructed antique bronze bedsteads, and everything is 100% Bolivian. That includes the coffee – don’t miss the highly sought-after Geisha. After dark, it turns into a cool bar, just as popular with locals as visitors. Try its Bolivian take on panini, with local parmesan-style cheese or tender llama ham, and wash it down with a quinoa beer by Niebla or a craft cocktail, such as the smoky Bolivian Negroni.• Plaza Tomas Frias 15703, on Facebook

A bar and a museum of Bolivian pop culture, La Costilla de Adan (Adam’s Rib) is a drinking den in boho Sopocachi whose two floors are crammed with thousands of curios. There are books, radios, lamps, dolls and vintage film posters from around Bolivia – the highland cities of Potosí, Oruro and Cochabamba as well as local flea markets. The leche de negro Leche de Negro cocktail – a mix of brandy liqueur, quince liqueur and coca – and the goat’s cheese empanadas are highly recommended.• Calle Armaza 2974, on Facebook

One of Bolivia’s great assets is its award-winning coffee, and a new wave of cafes is catering to rising demand. Four friends opened Typica last year in a small house in San Miguel, decorating it with retro finds, from family and the Feria 16 de Julio flea market. They buy beans from small producers and roast and blend in-house. Owner and barista Fabio Arandia recommended Takesi, brewed in a Chemex wood and glass coffeemaker to bring out the flavour of the world’s highest-altitude beans. The brownies here are good, too.
• Calle Enrique Peñaranda Bloque L-35 San Miguel, on Facebook

Gustu’s groundbreaking bar – at the same address as the restaurant above – was the first dedicated to singani, the national spirit distilled from grapes. Now it’s all-Bolivian ethos extends to other homegrown spirits. La República gin, which uses a bespoke blend of Andean and Amazonian botanicals, and 1825 vodka, triple-distilled using Andean snowmelt and high-grown Amazonian wheat, will soon be joined by Bolivia’s first whisky, Killa Andean Moonshine from Andean Culture Distillery. It also serves craft beers from around the country and high-altitude wine, which has been produced in Tarija for more than 400 years.
• Avenida Costanera 10, +591 2 211 7491, gustubo.restaurantgustu.com

This isn’t your typical Bolivian watering hole. Old train tracks lead up to a rusting revolving door belonging to an old train wagon from the legendary Patiño Mines. Inside, the steampunk aesthetic continues with engine art and aeroplane sculptures. All the furniture was created from upcycled car parts, metal shafts and wheels. Candlelight and Bolivian craft beer add to its charms.
• Avenida 20 de Octubre 2271, no website

On a quiet side street, a Bolivian-American couple have restored this large Sopocachi house. Each of the 12 rooms is furnished eclectically, most have stunning views over the city, and some come with sunset or sunrise views over the mountain Illimani. There’s plenty of outside space, a communal kitchen and a good restaurant serving creative seasonal dishes, such as filete de llama a la plancha con dos salsas and Andean fish and seafood stew with saffron.
• Doubles from £30 B&B, 461 Subteniente M. Carranza, rendezvouslapaz.com

The city’s first boutique design hotel, in the upscale Zona Sur, is 100% Bolivian: the floors are local stone, ajo wood headboards hail from the Amazon and cowhides from Tarija. And Bolivian artist Gastón Ugalde’s work is everywhere, from photographs of Uyuni’s dazzling salt flats to heads wrapped in vintage Andean textiles. Go to the seventh floor for a dip in the pool or a drink at the bar with mountain views, and Ona restaurant for Bolivian produce.
• Doubles from around £120 B&B, Calle 16, 8052, atixhotel.com

In a restored colonial house in the heart of downtown, this hotel is minutes from the Witches’ Market, San Francisco Church and Plaza Murillo. The 41 rooms are decorated with Andean textiles and local handicrafts. There’s a flower-filled courtyard with fountain and a cosy lounge for when it’s chilly.
• Doubles from £65 B&B, hotelrosario.com

At this tranquil, family-run boutique hotel, the rooms are simple, modern and en suite. Breakfast is served in a small, glass-walled cafe, with straight-out-of-the-oven goodies from the family bakery. It’s close to Sopocachi’s plentiful cafes and bars, and just one block from Mi Teleférico’s yellow line for getting around the city.• Doubles from £50 B&B, casafusion.com.bo

READ  20 of the best adventure travel challenges for 2018

20 of the best adventure travel challenges for 2018 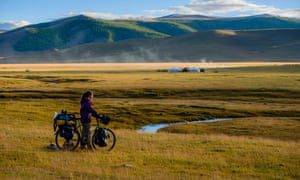