In this compulsively fly-drive, time-crunched era it may seem implausible to travel by rail to the southern extremity of Europe – but the craziest trips are sometimes the best. You can forget about ferries, car-hire rip-offs, driver fatigue, traffic jams and parking problems; and enjoy instead a variety of scenery and serendipitous conversations on platforms.

This trip uses fast trains to reach Andalucía and slow(er) ones to get around once there. The minimum length for this trip is 10 days (four getting to Andalucía and back) but it is better spread over two or three weeks, especially if you also want to visit Barcelona and Madrid.

To get to Spain from London, take the Eurostar to Paris and transfer from the Gare du Nord to the Gare de Lyon. Here, catch the high-speed Franco-Spanish train that streaks through the Rhone valley to Perpignan before slipping through the eastern Pyrenees. In the Rhone valley, the train passes through Lyon and reaches the western edge of Provence. The line follows the Mediterranean coast (vineyards, lagoons, roman ruins) into French Catalonia and across the last of the Pyrenees (trees and pastures) into Spanish Catalonia. Once across the frontier the train passes Figueres (birthplace of Dalí) and medieval Girona before arriving in Barcelona.

Even if your time in Barcelona is short, visit the Gothic Quarter, including the cathedral, and the Gaudí monuments of the Eixample. Spend the night at Acta City 47 hotel (from around €69 room-only), just five minute’s walk from Barcelona Sants station.

The next morning continue the journey on the super-fast AVE to Madrid via the austere badlands of Aragón to monumental Zaragoza. The line then cuts south-west via Calatayud in the Jalón valley to get to Madrid’s Atocha station. Take a moment to enjoy a coffee, at least, in the station’s singular concourse (a vast greenhouse) or at the Reina Sofia Art Centre (containing Picasso’s Guernica), which is across the road from the station. If staying overnight or longer, Urban Sea Atocha 113 (doubles from €72 room-only) is less than five minute’s walk away.

READ  Mallorca: the other side of Love Island

Heading south from Madrid, the AVE line runs across La Mancha, leaving the magnificent city of Toledo to one side and passing the phantom Ciudad Real airport (opened in 2009 but closed three years later due to financial difficulties), featured in Pedro Almodóvar’s 2013 film, I’m So Excited! The land is flat and sparsely populated; some of it is under vines for La Mancha wines.

Once across the remote Sierra Morena, with its pasture and wild vegetation, the train descends into the fertile Guadalquivir valley with its olive and citrus trees, before entering Córdoba. It is about 40 minutes’ walk from the station to the city’s famous mosque and Jewish quarter. As there are no good, cheap hotels near the station, the historic part of the city is also the best place to stay; try Pensión Los Arcos (doubles from €60, it’s a popular bolthole so book ahead).

The southbound line sweeps round to the west of Córdoba and travels through farmland and olive groves. Most trains stop at Antequera’s Santa Ana station which, for track-surveying reasons, stands in the middle of nowhere. It requires a bus ride to visit the city’s prehistoric dolmens, but it is worth the detour. (In normal times, there is a rail line linking Antequera with Granada and its Alhambra, but this is currently closed for maintenance.)

Finally, the high-speed mainline runs out in the port city of Málaga, famous for its Alcazaba (castle) and as the birthplace of Picasso. To get to the cathedral, castle and Picasso museum means a bus or taxi ride. The city centre has several boutique hotels but if you just need a place to crash near the station, Hostal Tilos (doubles from €50) fits the bill.

READ  All rise: a bread-making break in Spain's Sierra Nevada

Take the local train on the scenic line from Málaga up the Guadalhorce valley, with its arable land, woods of evergreen oaks and blue lakes, to El Chorro, which serves perhaps the highlight of this trip: El Caminito del Rey (which needs to be booked in advance, in accordance with the train timetable), a walkway, pinned to the steep walls of a dramatic gorge. Get off here and catch the shuttle bus to the start of a sensational walk through two gorges culminating in a vertiginous suspension bridge. Several hours later, weary but exhilarated, you will be back at El Chorro. Either get back on the afternoon train out of town or stay the night in La Garganta (from €95 room-only).

Continue on the same line towards Seville across the under-populated plains of central Andalucía, with their fields of cereals, carob and olive trees, and stop at Osuna, 1½ hours from El Chorro. A handsome small town often overlooked by tourists rushing between the cities of Andalucía, Osuna was once a ducal fiefdom and has more than its share of mansions and churches, as well as a 16th-century university. The place to stay is the Hotel Palacio Marqués de la Gomera (from €62 room-only).

From Osuna continue on this branch line to Seville – and then allow plenty of time to explore it. Santa Justa station is north of the city centre. The distance to the cathedral, riverside and exquisite Santa Cruz quarter in the centre is just about walkable – allow 40 minutes – or you can take a bus. You’ll be spoiled for choice with accommodation in Seville: the best within shouting distance of the station is Virgin de los Reyes (from €83 room-only).

When you are done with flamenco, tiles, flowerpots, window grilles and tapas bars, head back to Santa Justa and board the northbound AVE to retrace your journey through Madrid, Barcelona and Paris.

How to do it

A one-way ticket from London to Córdoba on the route described above starts at £250 each way, excluding the cost of crossing Paris, if booked in advance with loco2.com. In Spain, discounted rail tickets are available for the over 60s and young people between 14 and 26. If you are unable to book local trains ahead of your journey, it is easy to get a ticket on the spot. A Spain Interrail pass is valid for three to eight days of travel within one month; prices start at €170 adult/€148 youth (12-27) for three days to €281/€243 for eight days; free travel for accompanied kids under 12. 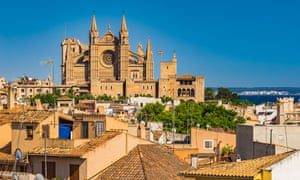