Ask French people where they would prefer to live and one answer that keeps coming up is Toulouse. Some 10,000 people settle here each year, drawn to the romantic ville rose, by the sunny southern climate and the lively bistros and bodegas serving delicious regional cuisine alongside tasty Spanish tapas. A Latin spirit pervades the city just 100km from the Spanish border, and the laid-back toulousains could not be more welcoming. Many of the distinctive red-brick palaces and mansions in the historic centre house world-class museums, and with a 100,000-strong student population, weekends turn into one long fiesta. Join them sipping a pastis apéro on the grassy banks of the fast-flowing Garonne river, or dancing salsa into the early hours.

WHAT TO SEE AND DO

One of the most majestic squares in France, the Capitole is bordered by grand buildings made from Toulouse’s hallmark rose-red bricks, with one side dominated by the pastel facade of the 18th-century city hall. It’s open to the public unless there’s a wedding on, and a grand marble staircase leads up to the sumptuous Salle des Illustres, covered with flamboyant frescoes. The square is the heart of Toulouse, packed at all hours, with locals vying to get a table on the terrace of Café Le Florida.

Built in 1555 for a wealthy Toulouse merchant, this fairy tale pink palace is worth a visit just for its stunning Renaissance architecture, but since 1994 it has also housed the Bemberg Foundation’s art collection. Five centuries of breathtaking paintings are exhibited in intimate salons: Canaletto, Brueghel, Bosch, Tintoretto. Modern masters include Picasso, Toulouse-Lautrec, Cézanne and Matisse, with one room dedicated to 30 works by Pierre Bonnard.
• fondation-bemberg.fr

This neighbourhood is a quiet oasis on the other side of the Garonne from the town centre. Start off with a plate of oysters at Madame Ginette’s stall outside the covered food market, then wander across to the Matou, Europe’s biggest poster museum. Then tour the avant-garde art in Les Abattoirs, the city’s former slaughterhouse.

READ  Greece on a budget: locals' tips on where to stay and eat

This immense Gothic convent is one of the country’s oldest museums – dating from 1795, when it was secularised during the French revolution – and has an eclectic collection ranging from Rubens to Toulouse-Lautrec, who was born in nearby Albi. The medieval cloister and garden are especially magical, surrounded by salons filled with evocative statues and sculptures.
• augustins.org

Toulouse has several covered markets but none compares to this foodie paradise, whose 88 stalls include sausage and foie gras specialist Maison Garcia, cheesemonger Chez Betty and artisan chocolatier Busquets. There are five restaurants on the upper floor, but it’s more fun to buy oysters and charcuterie from a stall and order drinks at one of the market’s watering holes, like Electro Bar or Bar des Amis, who are happy for customers to picnic at the bar. There’s also a lively farmers’ market in Place Saint-Aubin, east of the centre, on Sunday mornings.
• marche-victor-hugo.fr

Toulouse has a reputation for vintage fashion boutiques, with half-a-dozen lining narrow rue Peyrolières in the old town. Groucho at no 39 is by far the most popular, with an immense choice of retro outfits, from Hawaiian shirts to 1970s Gucci sunglasses or original Stan Smith Adidas trainers.
• groucho-retro.com

Families travelling with kids – and anyone interested in space travel – should not miss this sprawling futuristic park (a half-hour bus ride from the centre) that reflects the importance of Toulouse in the European Aerospace industry. Take a tour through the original Mir Space Station, gaze up at the towering Ariane space rocket, and experience what it might feel like to travel to Mars.
• cite-espace.com

In a former 18th-century inn, Le Colombier specialises in tempting regional dishes, including exquisite foie gras. But most people come for the legendary cassoulet, slow-cooked for some eight hours and served in a traditional earthenware dish (€25). Not for small appetites, it’s a mountain of white beans, Toulouse sausage, pork shank and confit goose leg.
• 14 rue Bayard, +33 5 61 62 40 05, restaurant-lecolombier.com

This buzzing, casual venue boasts one of the most extensive wine lists in Europe, stretching to some 2,300 bottles, with prices for all budgets and more than 30 served by the glass. The cuisine is a gourmet French take on tapas: creative seasonal nibbles like truffled egg, scallop carpaccio, grilled artichoke, and plates of local cheese and charcuterie (from €4).
• 5 rue de la Bourse,+33 5 61 38 44 51, n5winebar.com

The Carmes neighbourhood is the heart of Toulouse’s nightlife scene, and the laid-back Vicente, a French-style bodega, is surrounded by funky restaurants. Wines are mostly from the nearby Fronton area and Languedoc, and the tapas have a hearty local flavour: grilled duck hearts, garlicky potatoes, barbecued octopus, bone marrow on toast (from €8).
• Place de la Dalbade, +33 5 31 22 64 40

The menu changes every day in this industrial-style redbrick diner, where reservations are vital. The cuisine is high-end and inventive – plump oysters atop creamy cauliflower with vodka and tabasco sauce, say – but the prices are decidedly bistronomique (three courses €19.50 at lunch, €35 for dinner), and there’s a great selection of organic local wines.
• 40 rue Peyrolières, +33 9 83 34 03 50, solilesse.com

La Maison du Vélo, on the banks of the Canal du Midi, rents bikes and organises cycle tours, and at the back has a shady garden cafe plus a cheerful bohemian canteen upstairs. Relax on battered sofas and choose from tasty dishes such as provençale-style cod or spare ribs marinated in lemongrass and ginger. There is always a vegetarian option, which is unusual in meat-loving Toulouse (mains €10.50).
• 12 blvd Bonrepos, +33 5 34 42 92 52, maisonduvelotoulouse.com

WHERE TO DRINK AND PARTY

Toulouse is crazy for rugby and pretty much all sports, and the numerous bars around riverside Place Saint-Pierre are invaded each night by raucous crowds. The best atmosphere is at Chez Tonton, run by the genial Madame Françoise, where the speciality order is a metre-long line of pastis shots.
• 16 place Saint-Pierre, pastisomaitre.com

Crowds spill out from this brilliant hole-in-the-wall bar on to the pavement and the Garonne bridge. It opens at 6pm daily and happy hour mojitos at €4 are the preferred tipple until 7.30pm, with free olives and peanuts and a mix of reggae and French techno booming out. Later at night there is usually a live band.
• 6 place du Pont Neuf, lefilochard.fr

Be ready for a shock if you walk through the doors of the anonymous-looking Tantina after midnight. The long bar will be seething like a fiesta, with crowds dancing to 1970s pop, a band of flamenco guitarists or Cuban salsa. Most people order sangria or tequila shots, and there are generous helpings of tapas from €3.
• 27 avenue de la Garonette, la-tantina-de-burgos-bodega.com

The latest addition to Toulouse’s nightlife scene, the maze-like home of the mythical Monsieur Georges stretches from a vaulted wine cellar in the basement through intimate chill-out and cocktail bars, up to a dance floor with DJ sets.
• 20 place Saint-Georges

Overlooking the Garonne on Place du Pont Neuf, this chic boutique hotel is perfect for a romantic stay. The 17 rooms have been decorated by Toulouse artists, in styles ranging from arty photography to graffiti.
• From €110 B&B, hoteldesbeauxarts.com

Right in the centre on rue Rivals, this reasonably priced family-run hotel makes a great base. It rents out bikes for €5 a day and can organise a baking course for guests at the patisserie school next door.
• From €70 B&B, hotel-albert1.com

Over in Saint-Cyprien, Gaëlle and Nicolas, escapees from Paris, have beautifully transformed an old iron foundry, living on one side of their shady courtyard and renting out a spacious two-storey B&B apartment (sleeping up to five) on the other.
• From €110 B&B, lafonderie-urbanbnb.fr

The pedestrianised rue Saint-Rome is always busy, but guests discover an oasis of calm once they enter the building where Amélie and Manu rent out two stylish, light-filled one-bedroom apartments. The young couple also offer advice on anything from eating out to where to shop for organic food.
• From €70 a might, ammappart.com

La Petite Auberge de Saint-Sernin
Surprisingly for such a big city, Toulouse has only one hostel. La Petite Auberge, near the university on rue d’Embarthe, resembles a friendly but chaotic hall of residence, each dorm having its own bathroom and kitchenette.
• Dorm beds €22, lapetiteaubergedesaintsernin.com

Denver city guide: what to see and do plus the best restaurants, bars and hotels

Wed Dec 18 , 2019
Tweet    ” ‘Gold!” went the cry in the summer of 1858 after a party of prospectors rolled into what is now Denver’s Confluence Park and discovered the kind of shiny stuff that makes hearts and bank balances leap. Sadly, there wasn’t enough of it to sustain a gold rush, and bigger […] 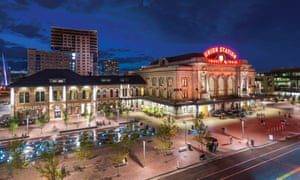