Early last year, around 150,000 people in Barcelona marched to demand that the Spanish government allow more refugees into the country. Shortly afterwards, “Tourists go home, refugees welcome” started appearing on the city’s walls; soon the city was inundated with protestors marching behind the slogans “Barcelona is not for sale” and “We will not be driven out”.

What the Spanish media dubbed turismofobia overtook several European cities last summer, with protests held and measures taken in Venice, Rome, Amsterdam, Florence, Berlin, Lisbon, Palma de Mallorca and elsewhere in Europe against the invasion of visitors. But in contrast to many, as fiercely as Barcelona has pushed back against tourists, it has campaigned to welcome more refugees. When news broke two weeks ago that a rescue ship carrying 629 migrants was adrift in the Mediterranean, mayor Ada Colau was among the first to offer those aboard safe haven.

Is it really the case that Barcelona would prefer to receive thousands of penniless immigrants rather than the millions of tourists who last year spent around €30bn in the city? The short answer, it appears, is yes. Increasingly it is tourism, not immigration, that people see as a threat to the city’s very identity – though numbers of both have risen exponentially in recent decades.

In 2000 foreigners accounted for less than 2% of the population; a mere five years later, the figure was 15% (266,000). In 2018, it is now officially 18% although, according to Lola López, the city’s integration and immigration commissioner, the true figure is closer to 30%.

The influx of new residents has radically changed the face of the city, but Barcelona has not seen a single anti-immigrant protest of any substance – nor is immigration an issue at local elections.

According to research by Paolo Giaccaria, a social scientist at the University of Turin, the case of Barcelona “establishes a connection between two types of mobility that are at odds with each other: northern tourism and southern migration. It subverts the common feeling about which kind of mobility is desirable which is not.”

Immigration has changed the city, but tourism is destabilising it – and even people in the industry agree that it can’t go on like this. In 1990 the city received 1.7 million tourists; last year the figure was 32 million – roughly 20 times the resident population. The sheer volume of visitors is driving up rents, pushing residents out of neighbourhoods, and overwhelming the public space.

“We see immigration as having a positive impact – people have integrated well,” says Natalia Martínez, a councillor in Ciutat Vella, the old part of Barcelona which has been at the forefront of both immigration and tourism. “It’s brought more than it’s taken away in terms of identity.”

Tourism takes something out of neighbourhoods. It makes them more banal – the same as everywhere else

Her colleague Santi Ibarra argues that the diversity that comes with immigration enhances the city – but tourism contributes nothing positive. “Tourism takes something out of neighbourhoods,” he says. “It makes them more banal – the same as everywhere else.”

Like London, the number of native Barcelonans is quite small, especially in working class neighbourhoods, which is where most of the latest wave of immigrants have made their homes. The three largest groups of immigrants are Europeans, Latin Americans and North Africans, mainly from Morocco, as well as significant Chinese and Pakistani populations – though López says that Barcelona has its own identity, distinct from that of Catalonia or Spain. “We’ve found that children born here of immigrant or mixed couples tend to identify themselves as being from Barcelona, rather than anywhere else.”

The main obstacle to integration is language, especially as schooling is in Catalan, which none of the immigrants speak. Magda Martí is a headteacher in a primary school in Ciutat Vella, where more than half the children are foreigners and says that, along with language barrier, food can also be an issue. The city council requires the school to provide a halal meal option if only one family requests it; Martí says this is tricky, not only logistically but ideologically for a non-religious school.

However, she adds: “To me it’s all the same where a child is from, the important thing is to make them and their families welcome. The really positive change is in the new teachers, who don’t see immigration as a problem. They see diversity as something positive, which is how I see it, too.”

The neighbourhood where immigration is most visible is El Raval (from the Arabic, meaning suburb), which lies on the opposite side of La Rambla from Ciutat Vella, and has long been synonymous with drugs and prostitution. Until quite recently it was known as Barri Xinès (Chinatown), though there were no Chinese people there – a reflection of its perceived otherness. These days it’s nicknamed Ravalstan for its sizeable Pakistani population.

There’s a massive level of immigration here but on a day-to-day level there’s no conflict, not even after the terror attack

Oscar Esteban, director of the Fundació Tot Raval, an umbrella group that coordinates a wide range of voluntary and statutory organisations in the area, compares el Raval to the east London borough of Tower Hamlets: both historically port neighbourhoods, and for centuries the point of entry to the city. (Similarly, life expectancy in El Raval is five to six years less than in the city’s more salubrious areas.)

READ  Ibiza in winter: unplugged but still on song

“El Raval has its own identity and its own way of dealing with things,” says Esteban. “Everything starts here, many social phenomena appear here first and then spread; we’re a social laboratory. There’s a massive level of immigration here but on a day-to-day level there’s no conflict, not even after the terror attack last summer.”

Thirteen people died and over 130 were injured in the van attack on La Rambla in August last year. Mohammed Halhoul, the foundation’s president and a member of the Catalan Islamic Council, says that afterwards people were “shocked and indignant, but everyone came together to condemn it”.

Halhoul – who came to Barcelona from Morocco in 1990 – attributes the lack of a backlash against the Muslim community to broad political consensus on immigration, and the city’s strong network of community associations. “There are isolated cases but when it comes to racism or Islamophobia, we don’t see it as a problem,” he says. “It’s not something we lose any sleep over.”

Of course racism exists in Barcelona inasmuch as it does in any other city – but it has not been allowed to fester. Since 2010 the council has pursued a intercultural policy (as opposed to assimilation) to recognise and respect cultural and religious differences that has enjoyed widespread support, and immigrants have not been scapegoated despite years of economic hardship.

But if they have succeeded in escaping a backlash, tourists have not – even though tourism accounts for around 12% of Barcelona’s GDP, and many residents’ jobs depend on it.

“There’s no question that a lot of people here live off tourism, but it can’t be a case of anything goes – there have to be limits,” says Esteban. “We’re losing much of the identity of the centre of the city, the port, the very traditions that attract visitors.

After 20 years of city authorities flogging Barcelona to visitors from overseas, the council elected in 2015 has moved to put the needs of citizens above those of visitors. It imposed a moratorium on new hotels, made efforts to contain the spread of tourist apartments and devised an urban plan for Ciutat Vella that prioritises local commerce over businesses aimed at tourists.

Albert Recio, a spokesman for the Barcelona Federation of Residents Associations representing around 100 bodies, says the dizzying rise of city breaks has had a significant impact on housing, with landlords choosing to make easy money renting to tourists, rather than residents and driving up rents in the process.

Public services are also feeling the strain. “People who live near the popular tourist spot of Park Güell can’t get on the bus because it’s full of tourists,” Recio says. “And many traditional businesses that have existed for over 100 years have been driven out.”

Barcelona is not alone in its battle to protect its identity, with many European cities being overwhelmed by skyrocketing tourism fuelled by cheap flights and platforms such as Airbnb. According to the Association of British Travel Agents, 53% of British holidays in 2017 were city breaks compared to 41% beach holidays.

Antipathy has reached especial heights in Venice, which last month erected barriers in an attempt to control crowds. “In Venice people hate tourists, especially the cruiseships – the worst kind of tourism,” says Patrizia Riganti, who teaches at the school of architecture at Nottingham Trent University and has researched the impact of immigration and tourism in Amsterdam and Venice. “They pollute the city, and consume it as though they were eating a sandwich, what in Italian we call ‘mordi e fuggi tourism’: literally, take a bite and run.

“As in Barcelona, the presence of tourists in Venice and the competition for services far outweigh any perceived problems about immigrants who, thanks partly to tourism, can’t afford to live there anyway,” says Riganti.

In Lisbon, too, they are feeling the negative impact of mass tourism. Fátima Bernardo, assistant professor of social sciences at the University of Évora in Portugal, fears that the Alfama district in Lisbon may face a similar fate to Ciutat Vella, as another neighbourhood with a strong community and sense of identity.

“What tourists like about Alfama is its authenticity, but now it’s too expensive and young people can’t afford to live there, only older people with secure tenancies, so Alfama is dying,” Bernardo says. “The neighbourhood’s social dynamic has changed.

“People in Lisbon are very worried about the possibility that our city and our identity might become like Barcelona – a parody and a theme park.”

The real issue is the pressure on public space which is not designed to cope with the volume of visitors. Tourists occupy bars and restaurants that were once popular among locals, they saturate public transport and clog pavements, and use far more resources such as water than locals.

Residents say the sensation is of being under occupation. It’s this that gives Barcelonans the sense of displacement, that their city and its identity are being stolen from them, making them little more than extras on the set of their own city – a sensation that not even large-scale immigration has provoked.

In Barcelona especially, immigrants are seen as part of the fabric – working, building communities, and generally making a contribution to the city while tourists simply use it.

“The image of the city that the people themselves have projected is of a place of welcome,” says López of the ease with which new immigrants integrate in Barcelona. But – at least for the foreseeable future – tourists can expect a different reception.

Tue Dec 17 , 2019
Tweet     Have we hit peak Camino de Santiago? Almost, according to a copy of the El Correo Gallego newspaper I found lying in a bar in the harbour town of Muxía in north-west Spain: a record 301,036 walkers completed the pilgrim trail last year – 98.6% capacity, said a professor. […] 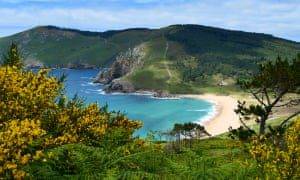