Without Turin, Italy would be a totally different country. It was pivotal to the unification in 1861 and served as the first capital, until 1865. Its royal palaces were home to the ruling House of Savoy until the second world war and then its factories – and the influx of migrant workers they attracted – were integral to the economic miracle that rebuilt and transformed the country after it.

Curious, then, that it is so often ignored when people talk about the best places to visit in the bel paese. Italy’s fourth largest city nestles in the foothills of the Alps and snowy peaks are never far from view. There are echoes of Paris along Turin’s central boulevards, and though it’s been more than 200 years since Napoleon’s rule was replaced by the Kingdom of Piedmont-Sardinia, there are still tangible French influences to be found in the city’s rich cultural and culinary traditions.

A long period of economic decline began in the 1980s, and for decades Turin was seen as an unappealing proposition by Italian and foreign tourists alike. That sentiment changed around the time of the 2006 Winter Olympics, however, and the city has since enjoyed a period of regeneration and reinvention, filling the post-industrial vacuum with cultural and social attractions.

If you’re into 90s rock, or want to see Ennio Morricone lead a full orchestra in an ancient Roman bath complex, then Italy is a paradise. If you’re into cutting-edge international acts, not so much. For fans of new music, Italy can feel like a cultural backwater at times, at least outside of Milan. Which makes the Futurfestival all the more special, because it has developed into one of Europe’s major electronic music festivals.

The venue alone is worth a visit. One of Turin’s post-industrial marvels, the Parco Dora is a wonderful public space created from a once-derelict manufacturing area along the River Dora that was home to a Fiat steelworks and a Michelin tyre plant. It blends green areas, walkways and sports facilities with striking, fossilised elements of the old factories. Like the more famous Lingotto centre, once a Fiat factory that was so big it had a test track on its roof, the result is a vibrant, modern space that embraces the city’s industrial past, rather than trying to erase it.

READ  Lisbon city guide: what to see plus the best bars, restaurants and hotels

Since the first edition in 2012, Futurfestival has developed a reputation as one for the music lovers rather than just those keen on partying, and it now attracts some of the electronic music scene’s biggest acts. Highlights this year include Carl Cox, South Korea’s Peggy Gou and the British-Canadian DJ Richie Hawtin.

It takes place within some of the park’s preserved industrial structures, running from noon until midnight each day, with 44 acts appearing across four stages. The biggest acts will play on the Jäger and Seat stages, with the Burn and Dora stages as more intimate alternatives. It is single entry each day, so no popping out for something to eat, but there will be plenty of food and drink stands on hand. Tickets are €55 for a day pass or €75 for the weekend.

For the well-heeled clubber, the organisers are also offering VIP packages, which can include stage access, opening and after parties, and tours of private art collections.
• kappafuturfestival.it

The Mole Antonelliana is the tall, neoclassical dome that many will recognise as the symbol of Turin. Originally conceived as a synagogue, it is now home to Italy’s National Museum of Cinema. Generally speaking, Rome is more synonymous with Italy’s film industry, but this consistently ranks as one of the most visited attractions in Italy, which is impressive when you consider the competition. The museum is home to a large permanent collection of cinematic equipment, props and memorabilia that traces the history of cinema from the earliest days of photography and the beginning of cinematography in the 1890s.

There is also a lift to the top of the Mole’s cupola, offering panoramic views of the city and the surrounding Alps. Alternatively, a walking architectural tour takes visitors from the ground floor to the top via a tight staircase built within the cupola.

READ  Eastern Europe on a budget: bargains from Poland to Montenegro

You may wonder why the world’s second-most important Egyptian Museum (after the one in Cairo) is in northern Italy. It is because it is the world’s oldest, educating visitors since 1824. What began as a collection bought by the ruling Savoys was greatly expanded in the early 20th century, thanks to extensive archaeological excavations conducted in Egypt by Ernesto Schiaparelli and Giulio Farina between 1903 and 1937, which brought around 30,000 artefacts to Turin. More recent additions include the wonderfully reconstructed Ellesiya rock temple, donated by Egypt in 1970 after Italy helped to relocate the Abu Simbel temples before the artificial Lake Nasser was flooded. Extensive refurbishments made in the last few years make for an enjoyable experience, and there is a pleasing contrast between the 17th-century building, its ancient contents, and the museum’s modern approach to storytelling.

Given the city’s history, the National Automobile Museum is a more obvious recommendation. The collection dates back to the 1930s, but the museum itself benefited from a major refurbishment in 2011 and is now suitably futuristic. It’s home to hundreds of vehicles, from a steam-powered contraption made in 1854 to Ferrari’s latest Formula One cars. It will clearly appeal to petrol heads, but there’s enough context and care put into the exhibition to entertain anyone interested in design, or indeed the effects that technology has had on society over the last couple of centuries.

Like its architecture, Turin’s food and drink benefit from foreign influence without giving up any of their own traditions. You’ll find plenty of barolo and barbaresco, but don’t be surprised to see people enjoying a pastis, too. Downtown in the Quadrilatero district, the Cianci Piola Caffè is one of my favourite little restaurants in all of northern Italy. Expect to be elbow-to-elbow with other diners, but with starters at €4 and mains rarely above €7, it’s hard to complain. There are usually specials, but the staples like tajarin (a ribbon-like pasta) with rabbit ragu or beef braised in barbera usually get my vote.

It’s also worth visiting the Cavallerizza Irreale, which is just down the street. Originally it served as a military academy and stables for the royal family and was given Unesco world heritage protection in the 90s, before the local government attempted to sell it to private investors around a decade ago. When they tried to evict a community of squatters, the building was occupied by a group of students and artists who wanted to save the space for public use. All are welcome, and there are weekly workshops, concerts and other cultural events.

The San Salvario district is popular with locals and tourists alike and its tight little streets are home to several of the city’s trendiest bars and restaurants. Anyone interested in exploring the Francophile side of Turin should check out SiVuPlé, which has a small but delicious menu and a wide selection of French cheeses and wines that the owners select from small producers.

Alternatively, La Cuite is a proper neighbourhood fixture, with an unassuming, friendly atmosphere and a diverse clientele. The interior is simple but comfortable, with a bar that serves a selection of interesting wines and beers. There’s also an excellent menu of reasonably priced, tapas-style dishes, making this a great option for an aperitivo. It’s tucked in between bigger bars and apartment buildings on a busy street and so can be easy to miss, but during busy periods you’ll usually find a crowd of regulars spilling out onto the footpath.

For coffee, head to the nearby Orso Laboratorio del Caffè, with its extensive list of beans from around the world and impressive selection of preparation options.

San Salvario is also adjacent to the Parco del Valentino on the west bank of the Po river, which is a popular socialising spot in the summer months. There are several options in the park for a beer and some snacks, but L’Imbarchino with its secluded setting, friendly atmosphere and its line of benches right on the water, is probably the best bet – when it reopens after renovations.

• This article was amended on 4 July 2019 to make clear that L’Imbarchino was closed for renovation work at time of publication.

Wed Dec 18 , 2019
Tweet    ” Granada is dominated by its mighty Moorish fortress, the Alhambra. Book ahead and visit early, at its least-crowded, and then spend the afternoon meandering the narrow streets and plazas of the old town – the Albaicín. Stay in this area at the 16th-century Santa Isabel La Real, with its […] 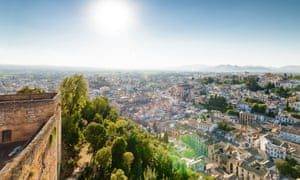