Hotel kids’ clubs have traditionally been a site of crayons and anxiety, a place for parents to guiltily deposit their children in order to desperately try and pour an entire holiday into two short hours. No more. As the tourist industry begins to recognise the growing family travel market (with 44% of millennial travellers in the US now taking their children on holiday), hotels and resorts are rethinking the role of kids’ clubs.

A typical family hotel might have a brightly coloured basement, manned by a smiling woman armed with pens. For a fee, guests can leave their children here for an afternoon to watch a film or play board games. The new breed of kids’ clubs, however, offers not just respite for parents, but a jolly education for the children about their destination. About the culture beyond their hotel pool.

“At Six Senses Yao Noi in Thailand, children look after the goats and chickens, tend the kitchen gardens with the gardeners and learn to cook with ingredients grown on site,” says Tamara Lohan, founder of Mr & Mrs Smith. “Spain’s Marbella Club offers a really creative programme: kids nurture crops in the vegetable patch, or get experimental in the science lab. Staff at Constance Prince Maurice [in Mauritius] even take groups on frog hunts around the gardens with torches. Kids’ clubs are moving away from the traditional formula by removing the walls of the physical ‘club’ and encouraging young ones to engage with their environment.”

We arrived in Ibiza off-season – the nightclubs were closed, the plane was half-empty, the sky an unfamiliar shade of charcoal. I’d brought my four-year-old before the 7 million or so tourists descend for the summer, to review two of their kids’ clubs. This is an island leaning into its family credentials – as the partygoers of the 2000s have grown up, Ibiza has adapted to fit, concentrating more on its glamorous rural villas, its yoga retreats and “wellness” opportunities. Still, the shadow of the nightclubs remains long; Pacha’s jaunty cherry logo rears up in unlikely places, including on baby-gros and bibs, available for €11.95.

Our first visit was to the Hard Rock Hotel, where glinting frames present such cultural ephemera as one of will.i.am’s shirts, and an outfit Lady Gaga wore for an appearance sponsored by Yahoo. Upon opening the door to our bedroom, we found it filled with balloons. All bedrooms should be this way; every room since has been a disappointment. Theirs is a more traditional kids’ club, complete with VIP-style lanyards and infinite felt tips, but for all my attempts to guide her towards more organic pursuits, these were both things that my daughter found mind-blowingly entertaining.

We drove to the crossroads in Buscastell and ate tapas at Can Tixedo, where a barefoot drinker scribbled drawings for diners, who in return pressed cash on him as if he’d performed a striptease. My child, primed with the kids’ club pens, presented him with a colourful portrait before he could draw us, and he was less than impressed. Afterwards we trooped along the beach with our coats on, and climbed a 16th-century defence tower to gaze out at a choppy sea.

READ  10 of the best tapas bars and restaurants in Almería, Spain

The next day we moved to the Nobu Hotel, an elegant ivory and blue oasis that appears, until the staff greet guests’ children by their first names, intimidatingly grown-up. The rooms are arranged around two swimming pools, one of which is for families, the kids’ club situated at its corner. Here, alongside the ubiquitous crayons, not only are children invited to become mixologists at the poolside juice bar but they offer DJ lessons. The families staying were white-shirted and moneyed – some had brought their nannies – and many appeared to be employed in the upper echelons of the nightclub industry. It seemed only right their toddlers should spend their holiday learning the family business.

Dalt Vila, Ibiza’s fortified old town, felt a little like a kids’ club itself, with its steep, sloping streets and plentiful ice cream. Along the bay we sat on a cliff and watched surfers revel in the incoming storm. The rain came the following morning, on a cold wind that disturbed the hotel staff, who looked cautiously towards the sky with a grim kind of fear. “What do people do here in a storm?” I asked, and they shook their heads. The museum in town was closed for a national holiday; chairs were flying across the beach. “Watch TV?” they suggested. At the kids’ club the seaside shell hunt was cancelled, as was eco day and the Ibizan salt scrub session, though the following week promised sunshine and sushi workshops. Luckily, it had its own cushion-strewn cinema and we curled up there, in the dark.

READ  Spain on holiday: a day at the beach in San José, Almería

Like Ibiza itself, a place that has adapted to its visitors, it makes sense that luxury hotels are starting to give real thought to their offerings for children. The New York Times reported on a kids’ club set in a private pavilion at the Royal Mansour in Marrakech, where they offer Arabic lessons, treasure hunts and chocolate making, and one at Domaine de Manville in Provence, where children make jam from fruit grown in the grounds. It is almost obscenely simple (and evidently profitable): rather than kids being an afterthought, the new generation of hotels are capitalising on their ability to offer them unique experiences – and of course, for their parents to have a holiday from their holiday.

Easyjet has daily flights from UK airports to Ibiza from £32.99 each way. Nobu Hotel Ibiza Bay and Hard Rock Hotel Ibiza both have kids’ clubs included in the rates 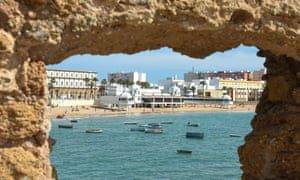